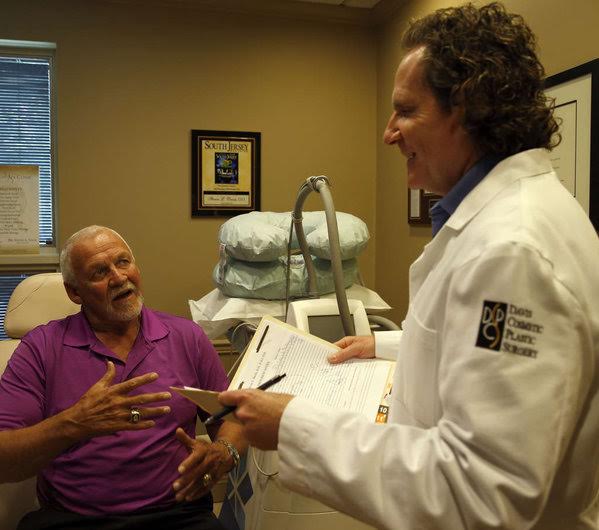 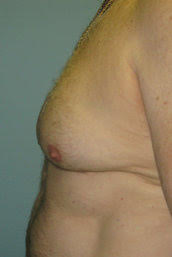 ILENE RAYMOND RUSH, FOR THE INQUIRER

For the first time in more than 40 years, former Philadelphia Flyers great Bernie Parent, 70, feels free to remove his shirt at the beach or on his boat, the French Connection.

The Stanley Cup-winning goalie, who suffered from gynecomastia – male breast enlargement – underwent a nonsurgical procedure in January that considerably reduced the amount of fat tissue in his chest to give him a more sculpted profile.

“It started in my mid-20s, so it’s always been an issue for me,” said Parent. “The thing about it is that you can work out and work out and never achieve what you’re looking for.”

Although he never had a problem during his playing years with teammates teasing him in the locker room about his condition, Parent says that “during the season, you keep yourself in pretty good shape and it reduces the size of your breasts. But once the season was over, somehow it came right back and became an issue.”

Though gynecomastia is common – it even turns up in infant boys – few guys will talk about it. For most men, it’s solely a cosmetic issue, but one that can carry considerable emotional weight.

Parent is speaking up now in order to help others.

“I know there are a lot of people with this situation and I know it affects you always,” he said.

The main cause of most gynecomastia is a hormonal imbalance. All males produce the female hormone estrogen, but if the estrogen-androgen balance is off, breast enlargement can result.

It’s common in puberty: Studies show about 70 percent of all males have some degree of the condition between ages 12 and 17. In about three quarters of cases, the condition will resolve on its own.

“If we see an adolescent who has had it for three months, we wait a year to see if it goes away,” says Joseph Serletti, chief of plastic surgery at Penn Medicine.

“Anything that goes through the liver that’s interpreted as being an estrogen component can send out and feed estrogen to other tissues,” says Steven Davis, the plastic surgeon in Cherry Hill who treated Parent. “For someone who has had a little bit of growth during puberty, any of these medications could cause estrogens that can increase breast size.”

Depending on the type of tissue involved – fat, breast tissue, or a combination – there are multiple ways of treating the condition. In Parent’s case, Davis used a technique called CoolSculpting, approved by the FDA in 2009 for removing fat deposits. An applicator is placed on each side of the chest for an hour to freeze and kill the fat in the chest area, after which the area is massaged. In three to four weeks, the body digests the fat tissue and excretes it.

One advantage of the painless procedure is that skin naturally tightens over the affected area without scarring, and patients can return to regular activities immediately.

Options that have been in use far longer include surgery and liposuction, “which give very, very good results,” according to Serletti. For men who have enlarged breast tissue as well as fat deposits, surgery may be the best option.

Davis stressed that men with gynecomastia should see a health-care provider if there is a breast mass, painful breast tissue, or when a teen has one side of the chest that is growing more than the other. All of these symptoms are red flags that require further evaluation to make sure there isn’t a more serious medical issue prompting breast growth.

If the problem is found to be cosmetic, treatment is not covered by insurance. CoolSculpting, which can involve one to three sessions, costs about $1,500 per session. For surgical procedures, Davis estimates out-of-pocket costs can run from $3,000 to $10,000, depending on whether any additional procedures – for abdominal fat or “love handles” – are done at the same time. For a surgical procedure that involves only gynecomastia, including hospital, surgical, and anesthesiologist fees, Serletti estimates a cost of anywhere from $4,500 to $5,000.

“Psychologically, this bothers people,” Serletti says of the condition. “People are very embarrassed. I’ve seen some incredibly accomplished people who were incredibly bothered by this.”

Parent, who has had the CoolSculpting procedure twice, said facing up to something that has bothered him for decades and getting help means “everything is better” in his life.

“It’s like anything else: you feel better, you look better, the rewards are much better,” he said. “It works not only on the beach but at home and everywhere.”

Parent, who penned a book, My Journey Through Risk and Fear, views his finally dealing with the gynecomastia as a calculated risk.

“If you want to get good results in life, you have to take risks,” he says. “When you get the procedure, it’s unknown if you’re going to be happy. I’m very, very happy how it turned out.”

What can be done about the excess skin along the back as well as the front of the body?

Are there times when surgery is not recommended?

Facial wrinkles are created from 4 different layers of the skin, fat and muscle